Another post, another attempt to find the five dragon artefacts and keep them out of the hands of the evil wizard Malbordus.  Once again, I've skipped ahead because Attempts 8 and 9 were both complete busts.  For Attempt 8 I rolled a Skill of 10 and a Luck of 7, but despite not being all that confident about my chances I gave it a good crack anyway. Predictably, I got killed by the Giant Sandworm; I knew things weren't going my way in the first combat round when I rolled a double 6 for it and a double 1 for me.  For Attempt 9, I rolled a Skill of 9 and just decided to chuck it in.  I skipped through Port Blacksand as quickly as possible, not engaging in any encounters, and when the dwarf warship picked me up I gave the wrong answer when they asked me the identity of their king.  As I suspected, they flogged me and threw me overboard, and my adventure was over.  I do appreciate a quick spot near the start of a book that I can use to kill off weaker characters.

For Attempt 10, I rolled a Skill of 11, a Stamina of 14, and a Luck of 8.  Those were not the most encouraging scores, aside from Skill, but I felt like I had a good knowledge of the adventure now, perhaps good enough to avoid encounters that would needlessly lower my stats.  I just had to hope that there weren't any mission critical Luck tests involved. For my spells, as usual, I chose Read Symbols, Open Door, Detect Trap and Fire.
I had little trouble on the road to Vatos, taking the route through Port Blacksand that I've outlined in previous posts.  Even the Giant Sandworm didn't give me much trouble, as the dice were falling in my favour for a change.  From the Merchant, I bought the Onyx Egg, the Crystal Key, the Bone Flute and Bracelet of Mermaid Scales; I know that three of those are useful during the adventure, and I took a gamble on the Bone Flute.
After my encounter with the Messenger of Death, my stats were as follows: Skill 10 (with a +1 bonus from wearing an Iron Helmet); Stamina 7; Luck 7; no gold, 10 provisions; also carrying: sword, backpack, leather armour, lantern, brass telescope, 2 silver buttons, pearl, golden key, water canister, brass handbell, onyx egg, bracelet of mermaid scales, crystal key, bone flute, sandworm tooth, iron helmet (+1 skill).
I've covered much of the dungeons beneath Vatos before, so I'll go over them as quickly as possible in point form: 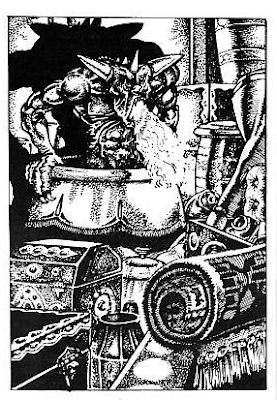 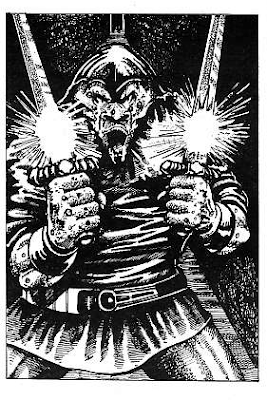 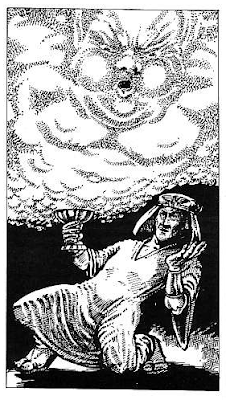 Taking no time to search the Skeleton Men, I ran through an arch and up a flight of stairs.  In an opulent room lined with marble pillars, a beautiful woman lay on a couch strewn with satin cushions. It was Leesha, the High Priestess of Vatos. A muscular man with milky-white eyes stood behind the couch, fanning her. At a snap of her finger, the muscular Servant moved to attack me. 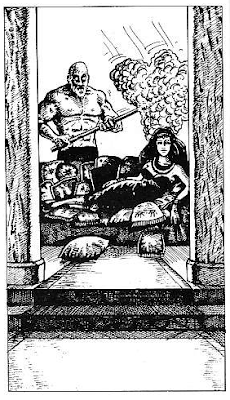 The Servant (8/8) was no match for me, and I cut him down with ease. Leesha rose from her couch, and held aloft a black, crescent-shaped object.  Rather than attack with my sword, I pulled out my Giant Sandworm Tooth. This was a lucky coincidence, as this was the only weapon that could harm her. (I'm not sure that the book ever clues you in to this weakness, or if it's just pure chance that the hero chooses this moment to use the tooth.)  With a look of horror, she fled from the temple.  Before giving chase, I decided to take a look in a chest near her couch. Written in gold dust on the bottom of the chest was the letter D - left there by the Messenger of Death.  It drained my strength (leaving me with 4 Stamina), but I was glad to have fully avoided the assassin's trap.  (I should have scoffed some Provisions here, but given that the book describes me as trying to chase down Leesha I decided that it would break the narrative.)
I chased after Leesha, in time to see her disappear through a door at the end of a hallway.  A bronze idol shaped like a dog was in the hallway, and I stopped to quickly investigate.  Inside the idol's mouth I found a Gold Dragon Artefact, the last of the five I needed.
Giving chase again, I entered a passage where I could see Leesha running through a door to the left.  To the right, a Dwarf was crawling towards me, delirious with sunstroke.  He called out to me, and I gave up my chase to help him.  He was an envoy from Stonebridge, and had been sent by the wizard Yaztromo to deliver me the legendary Hammer of Gillibran.  Apparently, this warhammer was the only thing capable of destroying the dragon artefacts, and it was vital that I destroyed the one closest to the entrance of Vatos' catacombs first.  The dwarf then died in my arms.  Figuring that my chances of catching Leesha were now gone, I took the time to eat two provisions (restoring my Stamina to 12). 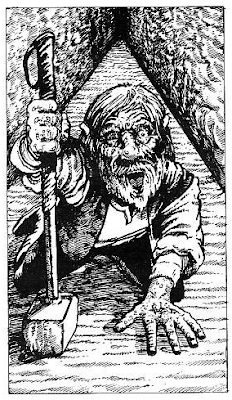 Entering the door I had seen Leesha disappear through, I found myself in a cold room with a high-vaulted ceiling.  There was a circular hole in the floor.  Figuring that my time was running short, I pulled out the five dragon artefacts, and set about smashing the one I had found near the entrance to the catacombs: the Bone Dragon.  It shattered under a single blow from the warhammer.  (This is set up like a test of the player's memory, but it's really not that difficult. You just destroy the artefact that's written down first on your equipment list.)
A thunderous sound came from the circular pit, and a gaunt man with malevolent features rose up through the floor. Malbordus demanded that I give him the artefacts, but I refused.  He clapped his hands together, and I was staggered by a deafening thunderbolt.  It quickly dissipated, though, as the copper ring I had found earlier was a ring of protection.  Realising that his magic could not harm me, Malbordus drew his sword and advanced. 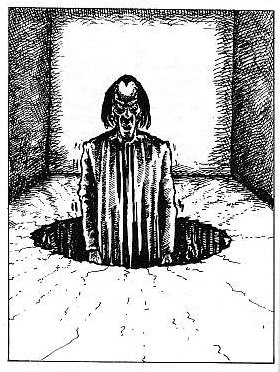 Malbordus was a skilled swordsman (Skill 10, Stamina 18), and our battle was long.  He wounded me several times (reducing my Stamina to 6), until I felled him with a final lucky blow.  (I used a Luck test to kill him a little faster, even though I probably didn't need to.)
With Malbordus dead, I smashed the rest of the dragon artefacts so that no other evil wizard could ever use their power.  Now I could return to Stonebridge, take the warhammer back to Gillibran, and perhaps learn some more magic from Yaztromo.  My adventure was a success.  (It seems more likely to me that Leesha would round up her Disciples and kill me before I could escape, but the book doesn't acknowledge that possibility.)
THE POST-GAME
Success, finally!  Ten attempts seems like a lot for a book that I never remembered as being particularly difficult, but death is much more likely in Fighting Fantasy when you explore every possible option.  My general tactic with FF is to check out everything I encounter, and gradually whittle down the options to the ones that are most beneficial.  It results in a lot of early failures (especially in books that I didn't read a lot as a kid), but it gets me there in the end.
I'll be back soon enough with my Final Thoughts on Temple of Terror, followed by an Exploring Titan post.  After that, it's on to Warlock magazine #5. which features "Search for the Mungies' Gold", a multi-player adventure from Steve Jackson, and "Dungeon of Justice", a solo adventure by Jonathan Ford.
Posted by Nathan P. Mahney at 3:11 AM

Nathan P. Mahney
Writer of 'Jack Manley and the Warlord of Infinity' and the forthcoming fantasy novel 'The Lightless Labyrinth'.