I'm nearly there.  I'm nearly at the end of this book, I'm sure of it.  It's kind of embarrassing to be ten attempts into a book I've finished multiple times before with no success to be had, but that's what happens when you try to beat these books legitimately.  It's all down to the luck of the dice at this point.

For this attempt I rolled a Skill of 12, a Stamina of 36, a Luck of 11, a Firepower of 8, and an Armour of 32.  Well, the dice had been kind to me at the beginning.  That Firepower was concerning, but I felt like those other stats would be enough to see me through.

Having been through the book so many times, I had my path pretty much set.  I'll quickly run through each encounter in point form just to recap.

As we infiltrated the camp to disable the vehicles of the Doom Dogs, Amber kicked a stone.  The guard on patrol didn't hear (due to a Luck test that reduced my score to 7) and we were able to crawl up to the fence.  I cut through the fence with my wire-cutters, and together we set limpet mines on their vehicles before sneaking back out.

Unfortunately, one of the mines failed to detonate, and the Doom Dogs gave chase in their station-wagon.   I was in good shape (with a Stamina of more than 10) so we were able to make it back to the Dodge before we were caught.

A battle with the Station-Wagon (Firepower 10, Armour 19) ensued, too close for me to fire a rocket, and after three passes I had sustained some minor damage (reducing my Armour to 27).  The Station-Wagon tried to ram me with the huge spike on its front bumper, but (with a successful Skill check) I was able to avoid the worst of it.  Even so, our cars were locked together, and there was no escape.

A challenge came over the Station-Wagon's speakers: fight "The Animal" in hand-to-hand combat, or I'd have to shoot it out.  I thought about it for a while, and decided that shooting it out would be the better option.  (I really did weigh this up for quite a while.  The Animal and I would have been equal in Skill, and I didn't fancy a 50/50 battle.  On the other hand, I was worried that shooting it out would be an instant death.  I took a chance on the unknown option.)

Amber and I opened fire, and the Doom Dogs fired back at us.  There were four of them and two of us, so I had to kill two of the Doom Dogs (Skill 7, Stamina 13 and Skill 8, Stamina 14) myself.  It proved to be little trouble, and I was only injured once despite them both firing at me simultaneously (reducing my Stamina to 32). 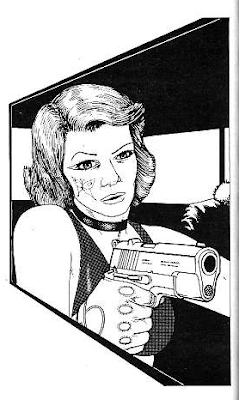 Amber took care of the other two Doom Dogs, but we had forgotten that there was one more: the Animal!  He charged at me, snorting through his mask, and caught me in a bear-hug (reducing my Stamina to 30).  Amber tried to hit him with a spanner, but she missed, and the Animal continued to squeeze (further reducing my Stamina to 28).  On her second swing she hit, and knocked him out.  We tied him up (well that's what the book says, but actually I put a bullet right through his skull) and drove the Dodge into San Anglo to a hero's reception.

At San Anglo I was able to rest while the petrol tanker I had come for was being prepared (restoring my Skill to 12 and my Stamina to 32).  I woke up to the sound of gunfire: the remainder of the Doom Dogs were attacking San Anglo's oil refinery!  One of them blew open the town gates by ramming a small truck into it, and the Doom Dogs drove into San Anglo as the townsfolk panicked.  (Didn't we disable all of their vehicles?  I guess they spent the night fixing them up.) 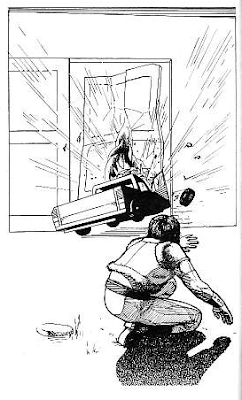 I was able to take charge (with a successful Skill check), ordering the townsfolk to take cover in their cabins.  One of the Doom Dogs ran out from cover, and tried to jump in the tanker's cabin and drive it away. 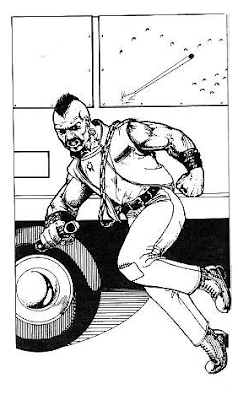 I gave chase, and was shot in the side in the crossfire (due to an unsuccessful Luck test, which left my Luck at 6 and my Stamina at 31).   By the time I reached him, he had started the engine.  He tried to shoot me, but I was quicker (my Skill was 12 compared to his Skill of 6).  I was able to take him captive, and used that to make the Doom Dogs retreat.  They fled into the desert, and I allowed my captive to follow them.

With the threat of the Doom Dogs beaten, it was time for me to return to New Hope with the petrol tanker.  I had to abandon the Dodge, because I had to drive the tanker, and nobody from San Anglo was grateful enough to accompany me back.

After driving for an uneventful day, I pulled into a motel car-park.  I decided to sleep in the cabin, not wanting to risk leaving the tanker unattended.  In the morning I took off again.  After an hour or so I spotted two bikers coming up behind me, each armed with crossbows.  At first I scoffed at their choice of weapon, until I realised that their intention was to puncture my tyres.  I was able to take one of them out with the tanker's machine guns (with a successful Skill test), but before he died he shot my tyre, and I was forced to stop the tanker in a terrifying skid.  The remaining biker challenged me to a duel, winner takes all.  I liked my chances, so I accepted.

We faced off, revolver versus crossbow.  I was quicker on the draw, and shot him dead.  (This involved each of us rolling a die and adding it to our Skills.  He had a Skill of 7, so there was zero chance that he was going to be able to beat me.)

The rest of the journey was uneventful, and as dusk approached, I drove the tanker into New Hope.  With the petrol the town would be able to flourish, and do some small part in the process of restoring civilisation.  I had also rescued Sinclair, so my mission was a complete success.

Finally!  I was just reaching the point where I was starting to get sick of playing through the same stuff over and over again, so victory came at about the right time.  There was one final hurdle at the end, where I was asked if I'd been bitten by a rat on the return journey.  I suspect that this would have happened at the motel, so I'm pretty happy that I decided not to go inside.

Ten attempts is not so bad, I guess.  One of those was the result of going somewhere I shouldn't, and a few more were the result of running out of petrol.  Most were down to the numbers, which is somewhat out of my control.  I'm just glad that the book has plenty of options for avoiding vehicle combat; my Firepower score was low, but between rockets, spikes and oil I got through.

NEXT: After the wrap-up post for Freeway Fighter (just one, because it's not set on Titan) I think I'm going to check out "The Dark Usurper" from White Dwarf.  It's a shame to put off my long-awaited return to Allansia in Temple of Terror, but I want to cover everything in some semblance of chronological order.
Posted by Nathan P. Mahney at 7:06 AM

Nathan P. Mahney
Writer of 'Jack Manley and the Warlord of Infinity' and the forthcoming fantasy novel 'The Lightless Labyrinth'.